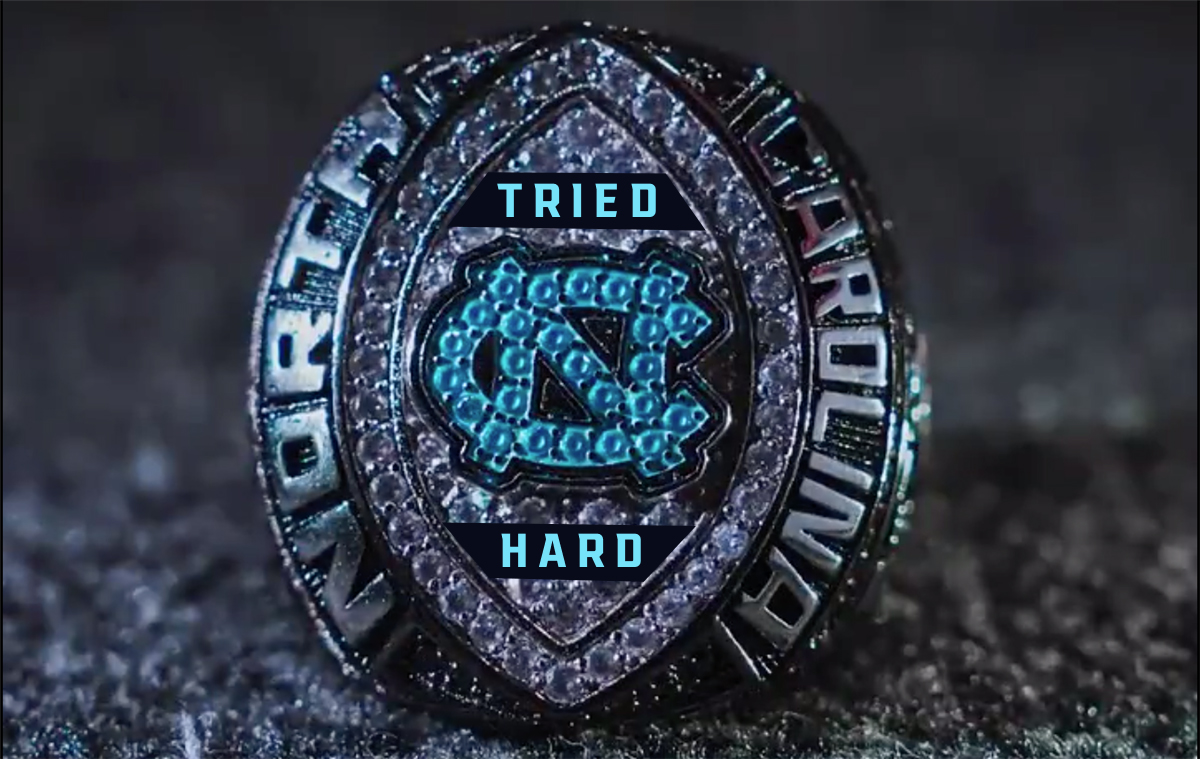 *This piece is satire. Other than UNC actually giving out rings last year, nothing is real. If you have an issue with it, sorry. Furthermore, we don’t need to be reminded that we have a full slant of ACC road games ahead and an end of season game versus UNC. Fully understand. Just couldn’t help ourselves in current times.*

Last year, UNC football found themselves with a season-ending bowl loss and an 8-4 record. The same situation as their Wolfpack rival down the road, as both finished tied for fifth in the overall ACC standings. To celebrate the glorious achievements of playing a football season, Mack Brown and staff presented the players with rings.

“In my contract, I get a bonus for rings and trophies, so with a bowl loss, this was the best I could do to fulfill that line item and cash out,” said Brown in his season ending press conference. “We can’t do paper classes anymore, so we’re onto paper rings.”

Ring Twice if You Played Football

So far this season, things aren’t looking good for the Tar Heels. They opened the season with a road loss to Virginia Tech. After two solid weeks of looking to be right back on track, they faltered again on the road to Georgia Tech.

“Look, the most important thing is, just like the bowl games, is that we played them,” said Brown after Tuesday’s practice. “Why not reward these players with a ring?”

Wednesday morning after film sessions, each member of the team was presented a ring to commemorate the achievement of playing two ACC road games.

“Why get a Heisman, when I can get another damn ring?,” said quarterback Sam Howell with a grin. “Coach Brown always makes us feel like winners.” The ring is beautiful. With the help of rich boosters, the diamond encrusted ring features a football shaped top and NC logo in bright, Carolina blue. Above and below the emblem, the ring reads, ‘Tried Hard’ which has become a motto of the 2-2 Tar Heels. The sides feature Top-10 Ranking imagery and the score 59-17 from their game against Georgia State.

“We’ll always have that pre-season ranking and we’ll always know that we played together on the road. The losses don’t mean anything, it’s about the bling,” said linebacker Chris Collins.

Will the momentum boost work? We’ll have to wait and see. Until then, go to hell Carolina.