NC State football’s home opener is this weekend, which has most Pack fans focused on the gridiron. However, the weekend is almost as important for Wolfpack basketball, who has two highly ranked visitors coming in for their official visits.

4-star combo guard Silas Demary Jr, who we are very high on, will be in Raleigh, along with 4-star forward Dennis Parker.

Parker is on the heels of visits to Georgetown and OK State the past two weekends and Demary Jr. just wrapped up his visit to USC (after taking an official to Tennessee earlier this summer).

Demary Jr. spoke in depth with PhenomHoopsReport.com about his visit to Southern Cal.

He seemed to have enjoyed his visit out there, saying…

“The visit was good. My family and I enjoyed ourselves and I went out here thinking how I can fit into their playing style since they were telling me they are now using a 2-lead guard playing style when before, they were playing through the post. And also, how is the environment and looking at the campus.”

That said, Demary is a local kid who won a state championship at Milbrook High prior to transferring to Charlotte for the coming season. After talking to him and his father, we get the idea that NC State is a very real player in his recruitment, making this weekend’s visit very interesting.

Obviously, NC State is in the market for a guard. With Terquavion Smith surely gone after this season (to the NBA), they need to fill that role. And while Demary Jr. is more of a do-it-all guard and less of a high-volume scorer, he’s a guy that Keatts has been targeting. Jarkell Joiner is in his final season, so that leaves NC State with just Breon Pass at the point. Grabbing Demary Jr. would give Keatts some nice flexibility at the guard.

As for Parker, he’s a kid who is pretty versatile himself. He’s 6’6 so you’d expect him to slot in at the 3, but he’s aggressive, bouncy, and can play inside and outside. This is the type of guy Keatts has targeted since he got to NC State. A stretch forward who can pop out and shoot, but also is dangerous in transition or in the paint. With Casey Morsell in his final year with the Pack, they need to find a quality 3 man for the 2023-24 season.

If State can secure these two kids, then they fill some gaping holes that will be opening up next year. That’s why this weekend is so important. We’ll keep you updated, so stay tuned as we’ll be talking to Demary Jr after his visit (and possibly Parker as well). I was pretty crushed when Rob Dillingham, the #1 PG in the country, de-committed from NC State.

Keatts really needs to stack some talent for next season with Smith, Joiner,  Clark, Burns, Mahorcic, and Morsell all likely gone. The only guys you can count on to come back are Breon Pass, Ernest Ross, Greg Gantt, and LJ Thomas. And while those guys are good players, that group is certainly going to need some help.

Now, of course, you have the portal, but Keatts needs to start landing some big-time high school talent. The narrative was that it was hard to recruit with the NCAA sanctions hanging over the program, but how true was that? This was the offseason we’d find out.

It took a while, but all of a sudden the dominoes are falling and Keatts is adding some key pieces.

First up was Dennis Parker. He’s a 4 star forward who is athletic, long, and can stretch the defense with a good outside shot. This is a key position for Keatts, but so is SG. With Terquavion Smith leaving, there are a lot of points to replace.

That’s why the commitment of Trey Parker is so important.

We’ve been calling Parkers a 4-star  because On3 has him ranked as such. However, both Rivals and 247 have him ranked as a 3-star. Why would Keatts take a 3-star at such an important position at this stage of the game?

I watched his highlights. I quickly understood.

Trey Parker is not a 3-star. Trey Parker might not be a 4-star. At the end of the day, he’s going to be very close to being a 5-star guard. That’s how good he is. In fact, he’s is very similar to Terquavion Smith. Both have unlimited 3-point range, very stright-up, nice elevation jumpers, both have good handles and both are super athletic. Smith might have a little tighter handle, but Parker is more athletic. They are both elite scorers.

Parker passed my eye test with flying colors. In fact, his highlight reel is one of the best I’ve ever seen for a kid coming to NC State.

My take on the Parker vs Dillingham game

This wasn’t just my take. The announcers had this to say about the 5 star guard in this game

“Rob Dillingham. Like, I’ve never seen a green light like this. I don’t know what coach said to that man, but he must’ve said ‘Do whatever you want to do.’ and he’s doing whatever he wants to to.”

Dillingham went off. He scored 36 points. He had some insane highlights, but all in all, it was a one-man show. Oh, and his team ended up losing.

It seems as if Parker took everyone by surprise recently because the announcer said “When Trey Parker got drafted to the Cold Hearts (Overtime Elite League team), I didn’t expect him to have this role, but he’s kind of taken on a lead role and he’s doing a good job.”

Parker finished with 18 points and 4 assists and was hounding guys on defense. In fact, he stripped Dillingham at midcourt and went down for a massive dunk. There weren’t any red flags with his game. He’s strong with the ball, he’s unselfish, he locks in on defense, he will be one of the most exciting dunkers NC State has ever had and he’s got unlimited range.

Oh, and NC State fans are going to love him. Here is what he had to say at halftime.

” I’m feeling good, man. Me and my team gotta play as a team on defense. And we got to talk on defense also. Defense wins games… We gotta talk more. communicate on defense. Defense is everything. Our offense is great right now.”

This kid has a chip on his shoulder. Maybe it’s the 3-star ranking? Maybe it’s because he only had offers from Kansas State, Mississippi State and TCU. Who knows, but this is another huge get by Keatts.

Remember, Terquavion Smith was a 3 star when he committed to the Pack and now here’s Parker committing with 3 stars (and just about ready to rise in the ranks.) Keatts is at it again, scooping up high-level talent before others realize it.

If you ask me, Parker has enough talent to come in and be a high-impact player from day 1. He might not be as flashy as Robert Dillingham, but he’s the guy I’d rather have. He’s going to be team-focused, hungry, and excited to play for fans in his home state.

Watch the whole game above and let me know what you think. ESPN ranks Parker as the #58 overall player nationally in the 2023 recruiting class, and the #5 player in the state of Florida.

Parker took an Official Visit to Alabama in September, and just took one to Villanova this past weekend, and picked up an offer afterwards.

Kris Parker Continue To Show Why He’s The Best Lead Guard in The Country❗️@KrisNooLimit @TeamBreakdown pic.twitter.com/VMGEXF3gBu

Kris Parker (@KrisNooLimit) Is The Smoothest Lead Guard In The Country 🔥‼️@TeamBreakdown pic.twitter.com/exhjuYbFJ1 Last night 4-Star 2023 Guard Trey Parker verbally committed to NC State, and he also signed his National Letter of Intent as well, hours before the end of the early signing period, which ended last night at midnight.

Both Wolfpack commits, Trey Parker and Dennis Parker, have signed their National Letters of Intent.

The fact that Keatts pulled this off right at the wire is beyond impressive. Trey Parker is set to see his national rankings soar in his Senior season, and was expected to see his offer sheet, which wasn’t all that impressive, expand. Parker is one of the more underrated talents in the 2023 recruiting class.

Incredible job by Keatts to get Parker to sign hours before the early signing period ended.

You can check out Parker’s insane VIDEO VAULT here. 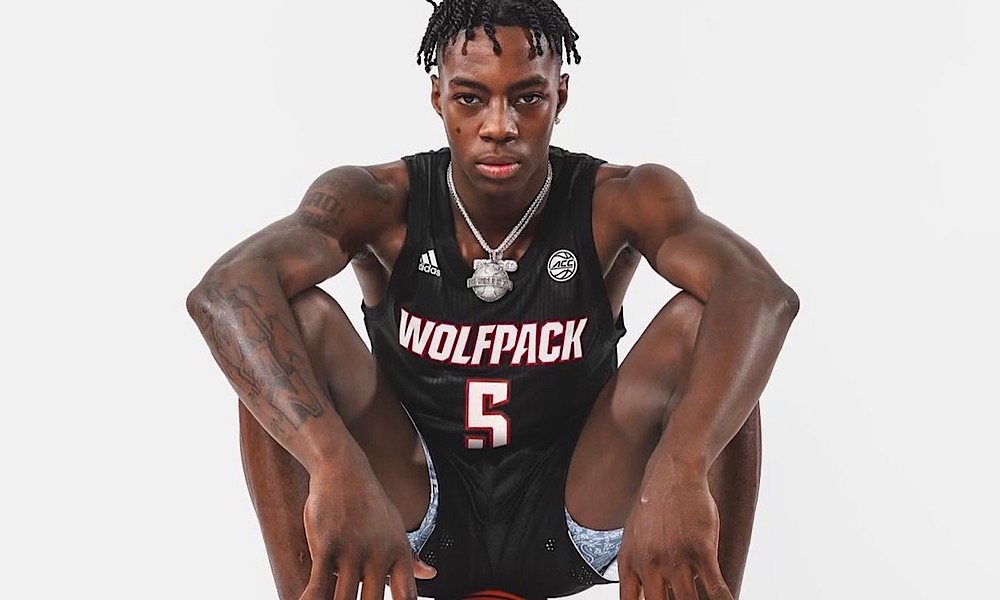